Rhythms of Grace: a Journey into Rest

THE POWER OF THE CROSS

Many are deeply wounded as a result of other people’s actions; many struggle with mental or physical health issues, as well as guilt and shame. Each one is the result of the work of the satanic ‘Prince of this world’ [John 12:31], and his minions.
However, Jesus came to wage war, and set people free from every bondage.

The reason the Son of God appeared was to destroy the devil’s work.
​[1 John 3:8]
​We see that battle being fought in every healing, every deliverance, and every restoration during Jesus’ ministry. However, the final victory over the Evil One's destruction was won on the Cross [John 16:11], and is described by Isaiah in the passage below.

​Alternative  translations of the original Hebrew text are given in brackets, to amplify and increase our understanding of that amazing event: 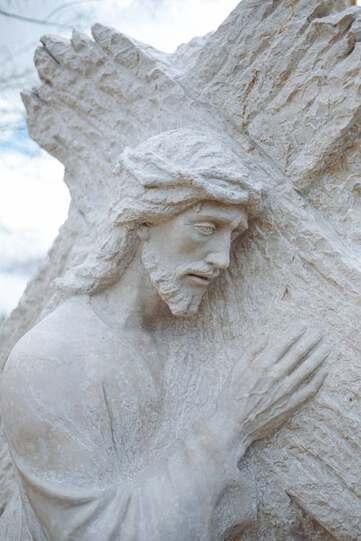 Who has believed our message, and to whom has the arm of the LORD been revealed? He grew up before Him like a tender shoot, and like a root out of dry ground. He had no beauty or majesty to attract us to Him, nothing in His appearance that we should desire Him.

He was despised and rejected by mankind, a man of (physical & mental) sorrows, and familiar with suffering (sickness & disease).

Like one from whom people hide their faces, He was despised, and we held Him in low esteem. Surely He took up (removed to a distance, like the scapegoat) our (‘our’ is emphatic) infirmities (sicknesses) and carried our sorrows (physical, emotional & mental pain), yet we considered Him punished by God, stricken (word used in connection with leprosy) by Him, and afflicted.

But He was pierced (defiled) for our transgressions (rebellion), He was crushed for our iniquities (punishment); the punishment that brought us peace (well-being, wholeness, safety, prosperity, peace with God and man) was on Him, and by His wounds we are healed. (Literally, 'by the means of His stripes there is healing for us'.)

By oppression and judgment He was taken away. Yet who of His generation protested? For He was cut off from the land of the living; for the transgression of my people He was punished. He was assigned a grave with the wicked, and with the rich in His death, though He had done no violence, nor was any deceit in His mouth.

Yet it was the LORD’s will to crush Him (break Him in pieces) and cause Him to suffer (make weak, sick or diseased), and though the LORD makes His life an offering for sin, He will see His offspring and prolong His days, and the will of the LORD will prosper in His hand.

After He has suffered, He will see the light of life (fruit of his suffering) and be satisfied; by His knowledge (or, by knowledge of Him) my righteous servant will justify (declare righteous) many, and He will bear (carry away to a distance, see v.4) their iniquities.

Therefore I will give Him a portion among the great, and He will divide the spoils with the strong, because He poured out His life unto death, and was numbered with the transgressors. For He bore the sin of many (for the rebellious ones He interposed, came between them and their punishment), and made intercession for the transgressors.
​Jesus took it all upon Himself on the Cross; He died to set you free.

HEAR & RESPOND to the voice of God
Get really quiet inside. Turn your heart of affection towards the Lord and ask Him to speak.

Whatever you are grappling with, bring it to the Cross right now. In your imagination lay it down before Him.

​Lord Jesus,
I believe You died for my sake, to set me free. Thank you for taking my burden of……………. so I would not have to carry it anymore. I lay it down before You and receive the grace of freedom.
Thank You that You have heard my prayer, and I’m receiving freedom from my burden right now.
Amen


*For more information on how the term ‘rhythms of grace’ is used on this website, please see the INTRODUCTION TO RHYTHMS OF GRACE: A JOURNEY INTO REST AND PEACE.

WANT TO KNOW MORE ABOUT THE POWER OF THE CROSS?

REFLECTIONS ON THE CROSS
30 days' reflections to help you grow in faith
THE 7 WOUNDS OF JESUS
A Rhythms of Grace free digital magazine:
Take a personal retreat to discover more about how the Cross deals with the issues in your life.

FROM AROUND THE WEB...

​[*Please see 'A Note on Resources' below]
The Cross has made you flawless!
A powerful truth sung by Mercy Me.

AWARE OF YOUR OWN SHORTFALL? ​

See the next page in this section:

RHYTHMS OF GRACE: A JOURNEY INTO REST